Amazon Echo and Dot or Google Home: Toys or Tools? Which is Best?

I have a gadget problem: I have too many and need more.

Last Christmas, my drop-dead gorgeous soon-to-be-wife bought me an Echo Dot and a WeMo Wi-Fi smart plug. The plug is pretty simple: you can turn it on or off with your smartphone over Wi-Fi. It ended the “your turn to turn off the lights” argument. Really, it’s a modern clapper.

But the Echo Dot? It’s a bit more. It does things like:

In short, it’s like Google Assistant or Siri, but in a standalone device. It’s neat. I’d say I use it 90% for music and 10% for anything else, as it was a lot more buggy last year than it is now. In fact, the promise of what’s to come is why I know have the Dot (a mini smart speaker), plus an Echo (full-sized) and I won a Google Home (also full-sized like the Echo) in a recent raffle.

Echo or Echo Dot or Google Home? Which has stolen my heart? And which do I expect to still be using in a year?

Echo and Dot: Competent and Evolving

Amazon started the smart speaker craze and it shows: their speakers work better than anyone else’s and it’s not even close. And yet: they’re still limited. What do I love? Being able to yell, “Alexa, play “Don’t Worry Be Happy” and it actually works. or “What’s the weather like tomorrow?” Or “What’s coming up on my calendar?” The “drop in on my bedroom” feature allows you to use multiple Echos as intercoms, which is less creep than it sounds — it’ll be handy when I’m elbow deep in baby poop and can’t walk to the other room to ask my baby mama a question.

What’s limited? For some stupid reason, I can’t set up recurring alarms or reminders. Something like, “Remind me to take my vitamin every day at 5pm” or “Move the car every Tuesday at 9am” is beyond her capabilities. Also, because it’s an Amazon device, but your services are likely Microsoft, Google, Spotify, and a million other non-Amazon accounts, set-up and debugging takes a while.

What about Echo versus Dot? They’re the same, though the Echo has better sound, obviously, as it’s about 10x bigger. For my living room, which has a sound system, I have a Dot. For my bedroom-office, I have a full Echo. If I worked in an office with a cubicle again, I’d probably go Dot+Bluetooth headphones and drive my neighbors nuts.

Google Home: How Do You Suck So Much? 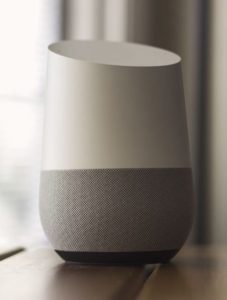 I was ready to drop the Echo immediately for the Google Home because big G rules everything around me — Voice, Email, Calendar, Google Search, Adwords, everything. And then I tried to set it up with my G-Suite (Google Apps) account that I use for everything. It isn’t compatible.

That’s right. Google’s own G-Suite (Google services, but instead of an @gmail account, you use your domain) doesn’t work with their own speaker. I ask, “Hey Google, what’s on my calendar.”

“Sorry, I’m not sure how to help with that yet.”

Mind. Blown. Google released a speaker last year that still doesn’t work with their G-Suite accounts. It does work with generic @gmail accounts, but I don’t have the time to migrate my entire life over to the generic platform, especially since Alexa (Echo) can tap into the G-Suite account data already.

What can it do that is cool? I can say, “Hey Google, call [person in my contacts or phone number].” It’s a sweet speakerphone. It can also handle recurring alarms — daily at 1pm, for example, but it can’t do reminders yet.

I’ve also heard that I can shout at it to play video content on my Chromecast, but I haven’t had a chance to try that yet. Voice controlling Netflix would be fun, for sure.

Oh, and it seems to be quieter than the Echo, but has a bit more “boomy” (thin bass) sound. It also looks like an air freshener, while the big Echo has that cool spinny ring on top with a bright ring of light that glows to tell you things (versus Google’s paler array of lights that hide under the surface).

Toy or Tool: Toy For Sure, For Now

Basically, they’re speakers. And there’s a lot of fun to be had in saying, “Play Wu-Tang” one minute, then “Play Taylor Swift” immediately after, without having to grab your phone and search for songs. And when I have my own home and can install a bunch of smart home features, like a thermostat and WiFi lights everywhere, I can totally see that being a useful feature.

It’s About Next Year, Maybe?

These aren’t ready for prime time. They’re toys for early adopters. But what about a couple years from now? I can easily see this happening for a tech-savvy lawyer talking to whichever device he/she owns:

Basically, they’ll move from toy to tool when they can handle tasks that take up wasteful admin time. Right now, Google can’t even read its own calendars, so we’re probably a ways off. I imagine this is like when smartphones first came out — anyone else remember the bevy of crap apps or gimmicks that came out in the early days? Plus, the fact that Google and Amazon are licensing their smart assistants to other manufacturers mean we’ll probably see these become pretty ubiquitous in the future: car and home stereos with Alexa, and a fridge that you can tell to turn on the stove vent and remind you when you get to the grocery store to get milk.

The future is (likely) bright for these things. But the present? Meh. I do expect Google’s to work better in the long run — they should be more compatible with their own systems than third-parties, plus they have a huge lead in voice recognition. Don’t underestimate the power of all the data and machine learning they’ve picked up from smartphone voice searches.

Until then: they make great DJs. But hey: hollering to hear some T-Swizzle is a pretty sweet way to wait it out.