Lawyer Awards Are (Mostly) Bullshit, Unless They’re Given to Me – American Institute Scam

I am one of the top ten Family Law attorneys in California.

Check that: I’m one of the “Ten Best” Family Law Attorneys for Client Satisfaction in California [if I pay for a membership in some organization that nobody has ever heard of]. A skeptic, as many a Missourian will be, might instinctively utter “bullshit” at such an award, and indeed, as much as I work to do my best for my clients, I have such a limited caseload that whomever was in charge of building the short list must’ve celebrated Cinco de Mayo a little too hard before drafting the list.

Are these random lawyer awards, a few of which I have been offered in the sixteen months since I made the jump to full-time legal practice, really worth anything?

The organization behind my most recent, most prestigious award, is the American Institute of Family Law Attorneys. Who is AIFLA? The Better Business Bureau cared enough to do some research recently and said this:

Certainly, the age of the organization provides some grounds for skepticism. But here’s my red flag: you don’t get to keep the award unless you pay for a membership to the AIFLA.

A tip to all the young lawyers out there: if you pay for an award, it is bullshit — period. If you receive these letters, it is a scam — period: 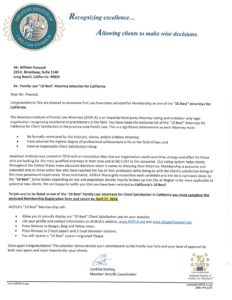 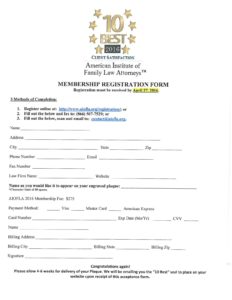 Perusing “American Institute” sites is almost a tragic experience: there are so many lawyers that fell for this scam and now have their faces plastered on these hall-of-sucker sites. And AIFLA/AIDUIA/AILegalCounsel/AIOPIA/AIOCLA/etc.has come up with an infinite variety of faux awards it seems: 10 Best Firms, 10 Best Under 40, 10 Best Female, 10 Best By State, and I believe mine was 10 Best for Client Satisfaction, across a handful of practice areas each, updated annually (of course).

How Do These Awards Stack Up With The Classics?

Lawyer awards aren’t a new thing: anyone remember Martindale Hubbell? Sure, they’re about as relevant as Pogs nowadays, but at one point, an AV-Rating was something to brag about. Was it something more than a vanity placard or was it simply an earlier incarnation of these arguably worthless awards?

I recently contacted Martindale to find out. And the selection process surprised me: submit a list of eighteen references (from outside your firm) to vouch for your abilities as an attorney.

Both are popularity contests. Is that better than a random organization using their own proprietary selection criteria for award recipients? Maybe a bit — at least the selectors are members of the profession who are arguably better equipped to differentiate between “good” and “bad” attorneys.

Here’s the big difference though: you don’t have to pay to keep your award (even if they do sell memorabilia and ad space for braggards).

Do These Awards Have Any Value for Attorneys?

The marketing term for these types of awards is “trust signals.” By appealing to third-party sources that vouch for your credibility, one can convince a prospective client or customer that you are, in fact, credible. Citing positive Yelp reviews is one way of doing this. Avvo client reviews and scores are yet another. Martindale ratings and SuperLawyers badges are too, of course.

What about these new awards? Do they serve any purpose? They might boost your Avvo score — which is a 1-10 rating based on awards, endorsements from fellow attorneys, publications, speaking engagements, and experience — if Avvo recognizes them. (Martindale and SuperLawyers certainly count.) And to a client who doesn’t know anything about lawyer awards (read: all of them), there is no way to differentiate between a “real” award and a paid one — you might sway an on-the-fence client if you display enough badges.

Besides that, do these awards trigger anyone else’s “ick” factor? (For a marketing tool to trigger a marketing guy’s ick factor, you know it has to be bad.) Promoting oneself as a “Top Attorney” when you know the award is simply a money grab tossed out willy-nilly to a number of attorneys who they hope will send back a check for $250 feels like a Nigerian scam for the lawyers and false advertising to potential clients. It may even be, gasp, unethical.

I passed on my AIFLA award. I have an Avvo 10.0 based on publications, endorsements, and speaking engagements. I have perfect client reviews to date. I’ve earned those awards and, as preachy as it might sound, faux trust signals just don’t feel right.

This was originally written in May 2016. I recently updated it in 2018 after stumbling across a couple other American Institute offshoots.